“The idea behind Rush Creek Village is simple. It seeks a community in which each house is uniquely designed for the lifestyle of the owner, but also fits into an architecturally integrated pattern. By planning this way, maximum advantage can be gained from the beautiful sites, yet the privacy of neighbors can be respected; the individual needs of home owners can be met, and the parts can be formed into an organic whole.”
—Rush Creek Village Board of Trustees, 1975

WHEN DID RUSH CREEK VILLAGE BEGIN?
The organic architecture of Frank Lloyd Wright, demonstrated in his Usonian houses, was the major inspiration for Rush Creek Village. Construction actually began in 1956 with the house of Martha and Richard Wakefield, who then became the builder of the neighborhood as well. The designer was Theodore van Fossen, who planned the entire community, defining the individual sites and designing the original houses. The architectural unity of the project was ensured by the rule that the original owners could receive their deeds to their chosen properties only after their plans had been approved by van Fossen.

WHAT IS ORGANIC ARCHITECTURE?

WHAT MAKES RUSH CREEK VILLAGE UNIQUE?
No other organically designed community of this size and architectural consistency exists. Each Rush Creek house is unique, but also represents an application of principles common to all. The initial siting of the entire community allows for extended vistas, while the deliberate placement of walls maintains privacy. The community represents a deliberate effort to make excellent architecture available to people of moderate means, while providing an alternative to the standard suburban development. The overall undertaking ­survives as a remarkable achievement for its time and place.

WHY IS THERE SO MUCH CONCRETE BLOCK?
Because the terrain was not bulldozed to accommodate the houses, concrete block was used as a cost-effective way of setting the houses into the landscape. In cases in which houses were partially below grade, the use of block also permitted this same material to continue on to upper levels. Van Fossen felt that concrete block, when used properly, interacted well with other ­materials, such as wood and glass.

The cement product used in Rush Creek was exceptionally well made by a local company, which in certain instances even added color to the block itself.

WHAT IS THE AVERAGE SQUARE FOOTAGE OF A RUSH CREEK VILLAGE HOUSE?
Martha Wakefield has stated, “Space is psychological, and isn’t done that way (by square footage).” The original triangular house (Williams) was 700 square feet, while the Wakefield residence, a long, graceful, sweeping structure, contains the smallest square footage allowed by the city of Worthington. These houses provide the residents with a perceptual sense of space that transcends the constricting limitations of the square footage concept and renders it ­virtually meaningless here.

ARE THERE DEED RESTRICTIONS?
Yes. Deed restrictions govern the structure and the ­exteriors of the houses, as well as major changes in ­landscaping, which could affect the vistas of the ­neighbors. The deed restrictions serve the continuing purpose of preserving the unique character and architectural integrity of Rush Creek Village. These are significant factors in maintaining the economic value of houses in an area where each is an integral component of the whole.

WHO REVIEWS REQUESTS FOR CHANGES?
Plans for alterations are reviewed and acted upon by the Plans Review Committee of the Rush Creek Village Board of Trustees, under Criteria for the Review of Plans that have been adopted by Rush Creek Village Company.

WHERE CAN I FIND OUT MORE ABOUT RUSH CREEK VILLAGE?
A recently created video documentary, The Architecture of Rush Creek Village, provides general ­information about Rush Creek, and is available through the Worthington Library, and The Shop at the Old Rectory. 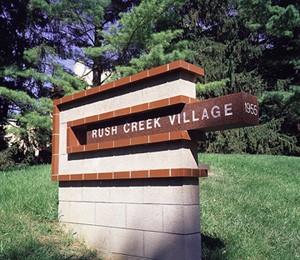